How to clean your ears Methods to avoid Symptoms of earwax blockage? When to See a doctor? Takeaway tips

Earwax is how the body lubricates and protects the ear. People do not usually need to clean out their ears, but sometimes earwax and other debris can build up.

Earwax, or cerumen, leaves the body slowly. Chewing and moving the jaw pushes the earwax from the canal to the outer ear. When the earwax and dead skin it collects reaches the outer ear, it dries up and flakes off.

According to the American Academy of Otolaryngology–Head and Neck Surgery (AAO–HNS), earwax has natural antibacterial properties that may help protect the ear from infections.

Cleaning the ear too often can lead to dry, itchy ears. Using an object, such as a cotton swab, for cleaning the earwax may actually push it back into the ear. Cleaning out earwax that is not causing any symptoms is not usually needed or recommended.

Still, there are times when a person may need to clean their ears if wax or debris has built up to the point that it causes symptoms, such as muffled hearing. In this article, learn how to clean your ears at home.

How to clean your ears

A person can use an irrigation kit to safely clean the ears.

The safest approach to cleaning ears is to visit a doctor or other healthcare professional, as they can use specialized instruments to remove any excessive earwax or debris safely.

These instruments may include:

A doctor can also help determine if other underlying health conditions may require attention.

If a person still wishes to clean their ears at home, they can try one of the following methods:

A person can wet a cloth or paper towel with lukewarm water. After wringing out the excess, they can use the cloth to clean the outer areas of the ear.

It is never a good idea to insert an object into the ear.

People can buy ear drops to use at home over the counter or online.

Alternatively, there are several solutions people can use as ear drops to loosen an earwax buildup and make it easier to remove.

A person can buy an irrigation kit that uses plain water or a combination of water and saline solution, or they can visit a doctor for professional irrigation. They may want to use ear drops before irrigation. A variety of irrigation kits are available for purchase online.

To start the procedure, a person should warm up the water and ear drops to about body temperature before they apply them to avoid side effects, such as dizziness. However, people should take care not to make the solution too hot, as it may lead to a burn.

To irrigate the ear, a person uses a syringe and squirts the water or saline solution into the ear canal. They should let any ear drops applied before irrigation sit in the ear for about 15 to 30 minutes by keeping their head tilted to one side.

The AAO–HNS warn against certain individuals using irrigation. People should not use irrigation to clean their ears if they have:

One of the most common methods people use at home to clean their ears is cotton swabs. The risks of using cotton swabs include:

Cleaning the ear with earwax candles involves inserting a conical wax-coated cloth into the ear canal. The individual then lights the exposed end of the fabric so that it burns. This method can result in:

It is never a good idea to insert any object directly into the ear, as doing this can cause injuries and push earwax further down.

Cleaning the ears too often can remove wax that serves to protect them from bacteria and other debris.

When earwax builds up in the ear, a person may experience some minor hearing loss and irritation in the ear.

People can also experience a sensation of fullness in the ear. In some cases, this may occur alongside an earache.

A doctor can diagnose ear infections and remove earwax blockages.

A person should see their doctor if they are experiencing an earwax blockage and do not feel comfortable using an at-home cleaning solution.

A person should also see their doctor if they have signs of an ear infection, such as:

In addition to acute infections, a person should consult their doctor if they experience repeated blockages. The doctor can discuss ways to try to prevent this from happening. A person can schedule regular cleanings with their doctor to help keep their ears clean and free of any blockages.

Earwax serves an essential function by keeping the ears clean of debris and bacteria. In most cases, earwax will naturally leave the body without interference.

Having a doctor or another medical professional remove the excess wax is the safest and best way to clear a blockage.

For those interested in at-home solutions, there are several safe methods that do not involve the risk of inserting objects into the ears. 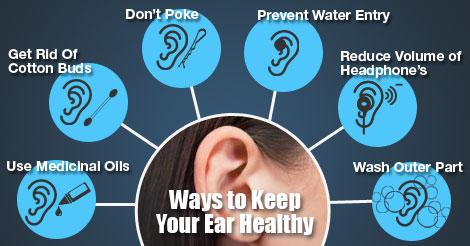 13 Habits to avoid during pregnancy chicken allergies
Scroll to top