Epistaxis, or a nosebleed, is generally caused by a broken blood vessel in the nose or sinuses. Bleeding from the nose, especially when blowing it, is very common and usually not a cause for concern.
An estimated 60 percent of people experience nosebleeds but only around 6 percent of cases require medical attention.
It can be hard to determine what causes broken blood vessels in the nose. However, there are several factors that may contribute to or cause the nose to bleed when blowing it.

Causes
Blood appearing when blowing the nose may be caused by dry nasal cavities, an injury, nose picking, or blowing too hard.
Common causes of blood appearing when blowing the nose include:
* blowing the nose too hard or too frequently
* inflammation or mucosal irritation caused by infection or allergies
* very dry nasal cavities or sinuses
* prolonged inhalation of very dry or cold air
* nose picking
* antibiotic medications
* blood thinning medications, such as warfarin, aspirin, and clopidogrel
* injury to the nose or face
* environmental factors, such as humidity or being at a high altitude
* abnormalities in the septum, which is the wall that separates the nostrils
Less common causes of nosebleeds include:
* nasal, sinus, face, or eye surgery
* foreign bodies in the nose
* nasal polyps or tumors
* inflammatory conditions
* high blood pressure
* holes in the septum
* blood disorders, such as low blood platelet levels and anemia
* conditions affecting the blood vessels, such as arteriosclerosis
* leukemia, a type of blood cancer conditions affecting the immune system
* liver or kidney problems
* scurvy, or severe vitamin C deficiency
* chemotherapy
* congestive heart failure
* chronic use or overuse of certain herbal supplements, most commonly vitamin E and gingko biloba
* exposure to toxic chemicals
* use of illicit drugs, especially cocaine
Some hereditary or genetic conditions that cause abnormal bleeding can also lead to blood appearing when the nose is blown. These conditions include:

Treatment options
Gently and firmly pinching the nose may be a recommended treatment option for bleeding noses.
In most cases, a nosebleed or minor bleeding from the nose eventually stops on its own after a few minutes.
There are a few at-home remedies, however, that may encourage nosebleeds to stop earlier or reduce the amount of bleeding.
Basic treatment options for bleeding noses include:
* laying down flat with the head tilted backward to reduce blood flow to the nose
* relaxing and breathing through the mouth
* not touching or picking the nose once it has stopped bleeding
* laying down or resting in a seated position for a few hours after the bleeding has stopped
* gently but firmly pinching the nose, especially if the site of the bleeding is known
Around 90 percent of nosebleeds occur in the front bottom portion of the septum, the fleshy wall that divides the nostrils.
Prolonged or repetitive nosebleeds, or those caused by an underlying medical condition, require medical attention and treatment.
If nosebleeds are severe, a person may require more aggressive treatment to prevent extensive blood loss.
Medical treatment options include:
* nasal packing, where sterile cotton pads or dressings are packed into the nostril to limit bleeding
* topical medications to limit bleeding, known as local hemostatic agents
* topical antiseptic and antibiotic ointments and creams
* sealing a blood vessel shut using an electrical device or chemical such as silver nitrate
* surgery where the blood vessel is packed with sterile materials to block it off
* surgery where the blood vessel is tied together to seal it shut
* clotting medications
* blood transfusions

Prevention tips
In many cases, there is no specific way to avoid nosebleeds, but there are some things that may help prevent or reduce the risk of them.
Blowing the nose gently and not picking at the skin can usually prevent minor bleeding.
Other tips for preventing bleeding when blowing the nose include:
* using over-the-counter nasal decongestant sprays or pills to treat allergies
* applying over-the-counter nasal lubricants or petroleum jelly in the nostrils to prevent dryness
* using saline sprays to prevent dryness
* avoiding picking the nose, especially scabs
* avoiding blowing the nose aggressively or too frequently
* protecting the nose from cold or dry air by using a scarf
* not overusing or misusing non-steroidal anti-inflammatory medications (NSAIDs) and antibiotics
* reducing inflammation and nasal congestion by using a nasal or sinus rinse
* avoiding exposure to toxic chemicals
* not using illicit drugs, especially cocaine
One example of a nasal rinse is a Neti pot. These are commonly available online and can be used at home.

When to see a doctor
If nosebleeds are chronic or repetitive, a healthcare professional should be consulted.
People should seek medical attention anytime a nosebleed does not stop naturally within 20 minutes. They should also seek medical attention if it does not respond to initial treatments, such as applying pressure.
Although nosebleeds tend to be harmless, severe or prolonged nosebleeds can cause serious blood loss, especially in:
* young children
* people over the age of 65
* people with immune conditions
It is also important to talk with a doctor about chronic or repetitive nosebleeds.
Chronic nosebleeds can be a sign of underlying medical conditions, such as blood or inflammatory disorders. Repetitive nosebleeds can also be a sign of nasal deformities or tumors, especially when they only involve one nostril.
People should also seek medical attention if nosebleeds are accompanied by any of the following symptoms:
* pain or tenderness around the eyes
* stuffy nose that continues to get worse and will not clear
* mucus that drips in the back of the throat
* change in the appearance of the nose or surrounding area
* pus in the nose
* chronic watery eyes
* reduced sense of smell
* change in vision
* enlarged lymph nodes in the neck
* pain or pressure in the ears
* hearing loss
* numbness in the face
* loosening, numbness, or pain in the teeth
* difficulty opening the mouth
* headache

Outlook
Bleeding from the nose when blowing it is a common experience. It is usually due to inflamed or damaged nasal tissues and blood vessels, and is not a cause for concern.
Nosebleeds are generally harmless, and stop on their own or after applying gentle pressure to the area.
Severe or repetitive nosebleeds can be a sign of an underlying medical condition that may require treatment, such blood disorders or obstructions.
People should speak with a doctor about severe or repetitive nosebleeds, especially when accompanied by additional symptoms. 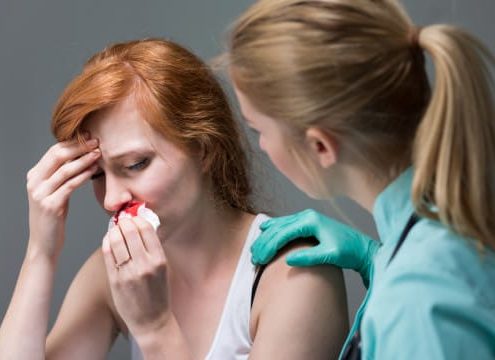 Does the gut hold the key to prevention?

Targeting specific microbiota in the gut could be one way to protect against type 1 diabetes, a new study concludes.

In type 1 diabetes, the immune system mistakingly attacks and destroys the beta cells, or those that produce insulin, of the pancreas. As a result, not enough insulin is made, and this can lead to an increase in blood sugar levels.
Type 1 diabetes accounts for around 5 percent of all diabetes cases, and onset of the condition is most common in childhood, adolescence, and young adulthood.

Type 1 diabetes and the gut
Although the precise cause of type 1 diabetes remains unclear, it is known that those who possess certain genetic variants are at greater risk of the condition.
For example, susceptibility to type 1 diabetes is higher among individuals who have variants of the human leukocyte antigen complex, such as the HLA-DQA1, HLA-DQB1, and HLA-DRB1 genes. These are genes that play a role in immune system functioning.

A route for prevention? 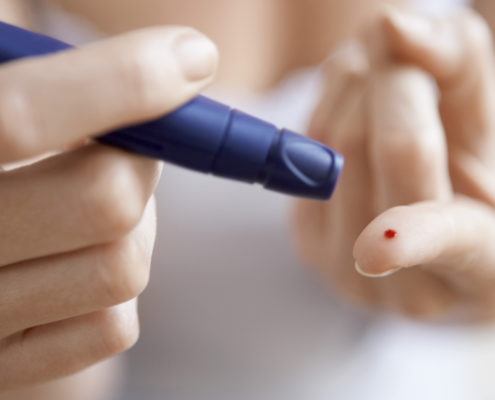 Woman Performing Blood Test on Herself